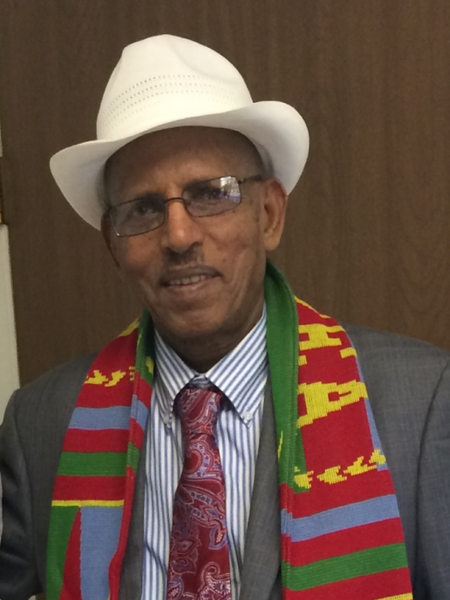 Shambel Basha grew up in Adi Hizbay and attended Kisad Da’Aro School and Tibo School in Mendefera. After his studies, he left school to pursue a variety of jobs. He went to Dekemhare and trained at the police academy. He worked for the police department for a number of years and was later promoted to the rank of first sergeant. In addition to serving in Asmara, Shambel Basha was also assigned to Assab and Keru. He was sent to Keru as punishment for cooperating with the Eritrean fighters during the war.

In the 1970s, Shambel Basha suspended his police service due to the war and returned to his birthplace, Adi Hizbay. While there, he continued to support the Eritrean fighters until it became unsafe to stay. In the early 1980s, he left for Sudan and began his journey to the United States. He made Cincinnati, Ohio his home in 1983.

Shambel Basha was happily married to Abeba Ghebreab for over 50 years. They have been blessed with six children, 12 grandchildren, and five great-grandchildren. Shambel Basha enjoyed spending time with his family and friends, watching sports and drinking Heineken.

Shambel Basha was preceded in death by his parents, Girazmat Tesfu and Tsige Kiflu; and his kids Kiros and Semhar.

Shambel Basha is survived by his spouse Abeba; his son Tesfaezgi, his daughters Almaz, Tsehaynesh and Hiwot; and his loving grandchildren and great-grandchildren.

To order memorial trees or send flowers to the family in memory of Yohannes D Tesfu, please visit our flower store.