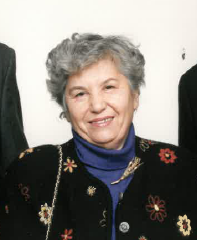 Bessie and her late husband Ted were the founders and owners of Blue Ash Chili for 30 years, and both were philanthropic here and abroad.

Contributions may be made to the Holy Trinity – St. Nicholas Greek Orthodox Church.

To order memorial trees or send flowers to the family in memory of Vassiliki "Bessie" Christopoulos, please visit our flower store.