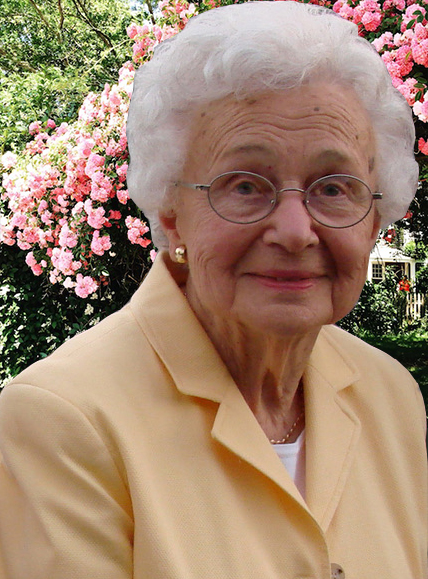 Ruth Louise Kugele Baker passed away peacefully on July 12, 2020, at the age of 102 years.  When she was just 70 years old, one of her grandsons attempted to encourage her by observing that she just had 30 years to go until she turned 100, to which she provided the shortsighted and inaccurate reply: “No way!”   Ruth was born in Cincinnati, Ohio to a German family (something she ALWAYS reminded those in her family with Irish surnames), grew up in the Roaring ‘20s and came of age during the Great Depression. She graduated from Western Hills High School in 1936 (“when it was new!” she would say) and was editor-in-chief of the school yearbook. Her dad kept his job during the Depression and she was able to go to college. She majored in Zoology at Miami University (“the real one” she would say), one of only two women in the department at the time, and was a member of Alpha Omicron Pi women’s fraternity. She met the love of her life, Bob Baker, on a double date while studying at Miami. They both graduated in 1940 and were married in 1943 before he shipped off to Burma in World War II. During the war, she worked at the Cincinnati Public Library and then later for a book publisher (she helped write and edit the summaries that appear on the dust jackets of books). After the war, she settled down with Bob in Westwood and raised their family.  Ruth loved to travel, and would often tell stories about her trips to Europe with Bob. She loved to play cards, especially Bridge, and made it her mission to teach her grandchildren how to play (though with only varying degrees of success). She loved Graeter’s Ice Cream and always had the same order: "Chocolate in a cone!" She loved to drink Chardonnay, but her real favorite was Glenlivet Scotch Whisky on the rocks with an orange spritz.  She loved to cook, and regularly indulged her grandchildren with her sweet creations as well as her famous “Manhattan Deli Salad.”  She loved the arts, regularly taking in shows at Cincinnati Playhouse in the Park, the Aronoff Center, the Showboat Majestic, and Covedale Center for the Performing Arts well into her 90s. She especially loved the Cincinnati Art Museum, where she volunteered for many, many years. She drove a car until she was 85, when she reluctantly handed over the keys to her electric blue turbo VW Beetle.  She was famously independent, refusing to consider living in a nursing home “because all those old people live there,” until she finally moved into assisted living for health reasons at age 98. She loved her family and had the wonderful privilege of meeting all seven of her great-grandchildren.  She will be interred next to her husband, Robert Baker, in the mausoleum at Spring Grove Cemetery in Cincinnati, Ohio.  She is survived by her daughters Ann Muhlhauser (Craig) and Jane Hennessey (Timothy), her grandchildren Kristin Thomas (Vic), Andrew Muhlhauser (Andrea) and Ian Hennessey (Leanne), and her great-grandchildren Claire, Alex, Ryan, Jack, Lilly, Brooks, and Brendan.  In lieu of flowers, memorial contributions may be sent to Cincinnati Art Museum, 953 Eden Park Drive, Cincinnati, OH 45202.