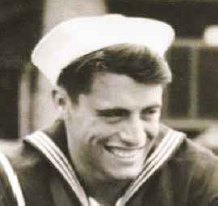 Modesto (Buddy) Tomasso Sarno, age 95, peacefully passed away on Friday, April 17th, 2020. Buddy was born on September 18, 1924 to John and Delia Sarno in Brooklyn, in 1942. Buddy graduated from Newton High School where he was captain of the track team.

In March of 1943, Buddy enlisted in the United States Navy in the Eleventh Special United States Naval Construction Battalion â€‹(Seabees) â€‹and in February 1946 he received an Honorable Discharge. He was awarded the Asiatic Pacific Theatre Ribbon 2 stars, American Theatre Ribbon and a Victory Ribbon. When he returned from the war, Buddy married his beautiful bride of 74 years, Evelyn, on February 24, 1946, in the First Italian Baptist Church, Brooklyn, NY.

Buddy began his lifetime career at the Long Island Lighting Company as a meter reader then worked as a salesman until he retired in 1989.  During his life, Buddy was on the board of directors with the â€‹"â€‹GoYeâ€‹"â€‹ Chapel (The Orchard Group).  He served as an Elder at the Nesconset Christian Church for a number of years and is still known to generations of parishioners as "Uncle Buddy". He was also a Scout Master for troop number 197. Buddy always enjoyed cooking for everyone and would volunteer to cook for church dinners and nursing homes. Buddy and Evelyn spent years volunteering at the Mexico Christian Children's Home in Queretaro, Mexico.

Buddy is survived by his wife, Evelyn; daughter, Lisa Shelton; son John Thomas Sarno; he is also known as "Poppy" to his grandchildren; Jennifer Rutherford; Kristen Halpin, Alison Keller, Ryan Keller; and great-grandchildren Sarah and Chloe Halpin; Lucy and Olivia Rutherford; he was preceded in death by his older brother, John Sarno, MD.

Due to the Covid19 Pandemic, a memorial service will be held at a later date. Those wishing to sign the guest book may do so through www.dwifuneralhome.com funeral website.  Memorials and/or donations in his name may be made to the Mexico Christian Children’s Home. P.O. Box 75234, Colorado Springs, CO. 80970

To order memorial trees or send flowers to the family in memory of Modesto "Buddy" Sarno, please visit our flower store.