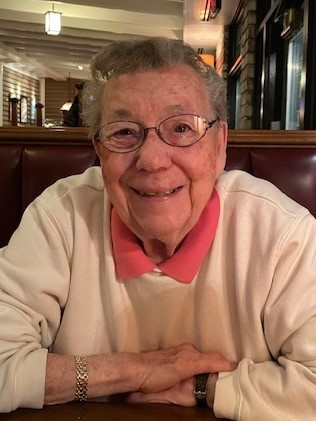 Marian R. Ackley passed suddenly but peacefully on Sept.6, 2020 at the age of 90 in Fairfax Va.  Marian was the 3rd daughter of Wesley and Alberta Ackley, born on March 3, 1930.  Marian spent most of her life in Cincinnati, graduating from Hughes High School.   She entered the United States Navy as a Wave in 1951 and was stationed at the National Naval Medical Center in Bethesda Maryland until 1955.  She returned to Cincinnati and began her career at Formica Corporation until her retirement in 1985.   In retirement, she played golf and was a member the Formica Retirees Orgnization (ROOF) and a Red Hat Lady.  She enjoyed family and friends.  She cared for her aunt, Mary Ackley until her death and then became a loyal volunteer at Bayley Place in Delhi, Ohio.

In 2017, after the death of her sisters, she relocated to Fairfax, Va. to be near her niece, Linda and her family.  She was very content in her new surroundings and actively participated at her retirement community.  She always enjoyed the company of her family and at the age of 87 still enjoyed being around her great-great nieces and nephews.

Funeral Mass was held on Sept 20 at Nativity Catholic Church, Burke, Va.  Inurnment at Spring Grove Cemetery on   October, 3, 2020, at 1:00 p.m.; family and friends will meet at entrance of cemetery and proceed to site.

To order memorial trees or send flowers to the family in memory of Marian Ruth Ackley, please visit our flower store.