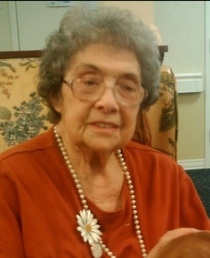 Marguerite Ginn, age 81 went to be with her Lord and Savior, Friday, August 22 at West Park Nursing Home, where she lived for the past seven years.

Marguerite was born and raised in Bordeaux, France with her mother, one brother and two sisters.  She was an interpreter for the U.S. Army and that is where she met her husband of 60 years.

Marguerite was a faithful member of Faith Fellowship Church previously Westwood Baptist.  Children were her passion, she worked in the nursery, directed the toddler age children and babysat more children than we can count.

She also loved animals of all kinds, sometimes we thought of her as Dr. Dolittle.  Family was her top priority, such as a devoted wife, and a love for her children that was exemplary. She was a very Godly woman and always presented her self in that way.  She will be truly missed by many.

She was the beautiful wife of John Ginn, loving mother of three sons, Rick (Carol), Ron (Stephanie), and John (Deborah).  Also the mother of two daughters, Tania (Dale) Wilson, and Tori (Rob) Netzer.  She also had 13 grandchildren and two great grandchildren.  Marguerite was the dear sister of Sylviane Capotrio and the late Annie Johnston and Edouard Johnston. Visitation with be 5 to 8 PM Tuesday Evening at the Dalbert, Woodruff & Isenogle Funeral Home, 2880 Boudinot Ave., 45238. Funeral Service at 10 AM Wednesday at the Funeral Home. www.dwifuneralhome.com

To order memorial trees or send flowers to the family in memory of Marguerite Francoise Ginn, please visit our flower store.