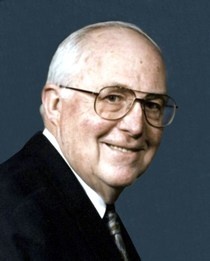 John David Luecke Jr. of Cincinnati, a prominent businessman, community leader and devoted family man, died Friday. He was 91 and had lived most of his life in Western Hills. Since 2009, he lived at Evergreen Retirement Community in Hartwell.  Mr. Luecke grew up in Fort Thomas, Ky., and graduated from Highlands High School, where he had been president of his senior class and captain of the basketball team.

He earned a B.A. degree from Miami University after serving with the U.S. Army in World War II.  As an executive at Riemeier Lumber Co., Mr. Luecke helped supply lumber for many of the largest construction projects in Greater Cincinnati during the second half of the 20th century. He worked at Riemeier for more than 50 years and was president of the company from 1982-1990. From 1990 to 2000 he was chairman of the board. He was also an officer in the Cincinnati Lumberman’s Association.  Mr. Luecke joined the Rotary Club of Cincinnati in 1965 and remained a member until his passing.  He was a Rotary Paul Harris Fellow, a member of the Cincinnati Executives Association, and a member of the board of directors of Cincinnatus Savings & Loan from 1977-2002, retiring as chairman of the board.

Mr. Luecke was committed to his family, church and Miami University. For many years, his car proudly bore the Ohio vanity license plate “Miami U”, and he rarely missed a Miami home football game. He was a past president of the Miami Men’s Club of Cincinnati and, a member of the Miami Red and White Club.

During World War II, Mr. Luecke fought in Europe as part of the 44th Infantry of the Seventh Army. He was awarded a Purple Heart and the Bronze Star with Oak Leaf Cluster.  Mr. Luecke had been a member of Western Hills Country Club and enjoyed few activities more than a round of golf with friends.  He was also an avid fan of the Reds and Bengals.

The family thanks Tender Hearts at Home Senior Care for its excellent caregivers during the last years of Mr. Luecke’s life — in particular, Amanda and Michael, who treated him with kindness and respect and enjoyed his sense of humor.

Visitation will be held Tuesday May 13 10 a.m. at St. Peter and St. Paul United Church of Christ, 3001 Queen City Ave. (at Ferguson Rd.), Cincinnati, OH 45238, followed by a service at the church at 11:30 a.m.  Dalbert, Woodruff & Isenogle Funeral Home serving the family.  To express your condolences, or  to make  a  memorial  contribution,  please  click the tabs above or below.