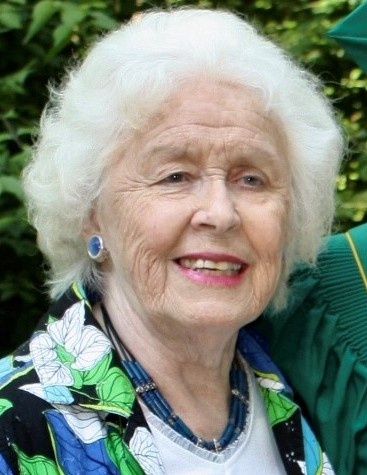 Family to do services at later date

On January 24, 2020 Janet Constand, devoted wife to Nick and mother of Rich, passed away peacefully at the age of 85 after being diagnosed with Alzheimers’ Disease in 2014.

Janet was the only child of Edward and Elizabeth Greene and lived most of her life in Connecticut.  Janet graduated from Goucher College, majoring in music.  Her favorite job was for the Muzak Corporation in New York City.  Music was a central part of her life and Janet could always be heard humming a tune.  She was a member of the Covenant Congregational Church of Easton, CT, where she served for many years as church secretary.  Nick and Janet retired in 1993 to Virginia Beach and she continued her love of being in a choir at the Community United Methodist Church.  Extensive U.S. and international travel was a part of her life that she treasured.  In 2015, Janet and Nick relocated to Maple Knoll Village in Springdale, Ohio to be near family.

Janet is survived by her husband of 56 years, Nicholas; her only child, Richard; daughter-in-law, Linda; and two granddaughters, Sara and Gwen.  Being “Gramma” to these two much-loved girls was likely the greatest joy of Janet’s life.  Countless knit sweaters and hats, cinnamon coffeecakes, and greeting cards were lovingly created by Janet for Sara and Gwen. Her endless love for Rich was inspiring as she endured his cancer journey with strong faith and her mantra of “God’s got this!”

Janet was very proud to be Swedish.  She loved her Oberg family of wonderful aunts, uncles and cousins.  Nick’s brothers and their wives were also very close with Janet.  To all these amazing members of Janet’s “village” – many thanks!  Please be sure that Janet sends each of you birthday wishes from Heaven.

Janet’s ashes will be laid to rest later this year in Connecticut.  Condolences to family may be sent to 640 Maple Trace, Cincinnati, Ohio 45246 and any donations may be made to the Cure Alzheimer’s Fund, 34 Washington St. Suite 310, Wellesley Hills, MA 02481 (curealz.org).

To order memorial trees or send flowers to the family in memory of Janet G. Constand, please visit our flower store.

Family to do services at later date