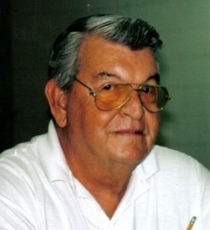 James J. Robb, Sr. (Jim), of Cincinnati, OH, died on May 31, 2014 at Hospice of Cincinnati in Western Hills. He was 80 years old. He was born on June 21, 1933 in Cincinnati, OH and attended Roger Bacon High School. He enlisted in the United States Navy, serving in the Pacific during the Korean War.  Jim retired from Monsanto Chemical Company after 31 years of employment, thereafter moving to N. Fort Myers, Fla., living there for a decade before returning to Cincinnati.  He was an accomplished wood carver and a member of the Caloosa Carvers Woodcarving Club in Cape Coral. Fla. He was a friendly, caring man that never met a stranger.

Jim is survived by his wife of 60 years, Jo Ann M. Ellison. He is also survived by his children James Jr. (Brenda L.) and Stephen. He had one grandchild, James J. Robb, III.  Additionally, he is survived by many nieces and nephews that he loved dearly.  He also enjoyed a very special “grandpuppy”, Maggie Havanese.  Jim was proceeded in death by his parents John & Jane (nee Geygan) Robb, his Brothers William, Donald & Lowell Robb and his sister, Patricia (nee Robb) Galloway.

Visitation will be at the Dalbert, Woodruff & Isenogle Funeral Home, 2880 Boudinot Avenue in Western Hills on Thursday, June 5, 2014 from 10 a.m. – 12 noon Followed by a 12 Noon Funeral Service at the Funeral Home.  A procession to Rose Hill Burial Park, 2421 Princeton Rd, Hamilton, OH 45011 for Interment will immediately follow.

Memorial donations may be made in his name to Hospice of Cincinnati or to the Disabled American Veterans.