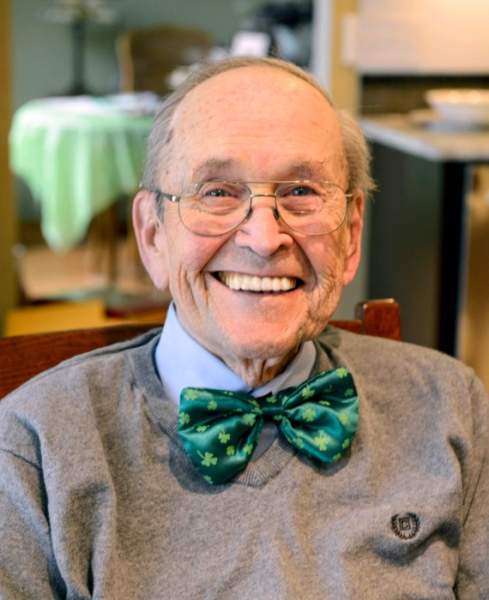 James (Jim) Patrick Haren passed away peacefully in his home, surrounded by his loving family, on February 11, 2020.

Jim attended Canisius College in Buffalo, graduating in 1951 with a degree in chemical

engineering. This led to successful careers in the chemical and environmental fields, with companies such as Allied Chemical, Envirosafe and the Ohio State EPA. During his career, Jim and his family relocated from Buffalo, NY to Cinnaminson, NJ, eventually settling in Maumee, OH.

Jim was a devoted family man who always put the needs of his family first. He lovingly cared for his wife and daughter, Sheila, in times of illness. Jim spent much of his retirement on the road, visiting his children and grandchildren in Ohio, Pennsylvania and Georgia. In his later years, he split his time living with his daughter, Moira, son-in-law, Rick, and granddaughter, Ava, at their home in Harrison, OH, and with his daughter, Sheila, in Philadelphia.

Jim was raised in a devout Irish Catholic home, where he developed a deep devotion to God. He was a humble, kind and gracious man who never had a bad word to say about anyone. He had a quiet strength and a faith that never seemed to waiver. Jim had a special devotion to Our Blessed Mother and often prayed the Rosary. It seemed fitting that God called him home on the Feast of Our Lady of Lourdes. For decades Jim was an active member of the Saint Joseph Catholic Church in Maumee, OH, and most recently was a member of the Saint John the Baptist Catholic Church in Harrison, OH.

Jim was a man who enjoyed life to the fullest and had infinite curiosity. Everything fascinated him, from the latest computer technology to the behavior of the cardinals flocking around his backyard bird feeder. He was very technology-savvy, and could often be found on Twitter, Facebook and Instagram keeping up with his grandchildren and the latest political developments. After Donna’s passing, Jim developed a keen interest in cooking. He collected hundreds of recipes and was always buying new kitchen gadgets. “Don’t mess with the chef“ was his motto as onlookers marveled at a 90-year-old using the microwave, stovetop and oven, all at the same time. Even at 91, he was still cooking his famous chili and grilled cheese sandwiches.

Jim loved the open water and was an avid sailor and fisherman. He spent years exploring the Lake Erie region on his sailboat and eventually served as the Commodore of the Jolly Roger Sailing Club in Toledo, OH. In 2000, he was named the ‘Ole’ Man of the River’ by the Ottawa River (Ohio) Kleanup Association for his untiring conservation efforts on Lake Erie and its tributaries. Jim also served his country in the 1950’s with service in the New York Army National Guard’s 27th Infantry Division, rising to the rank of Staff Sergeant, and was a member of American Legion Toledo Post #335.

To the end, Jim was a South Buffalo boy. He and Donna made frequent trips to Buffalo to visit family members and old friends and to attend class reunions. And when they couldn’t get to Buffalo it seemed Buffalo came to them. Summers and holidays were filled with a steady stream of friends and relatives from the old neighborhoods passing through their homes in New Jersey and Ohio to share a story, a laugh, and a cup of coffee.

He is remembered for his beautiful smile and gentle spirit by the hundreds of others whose lives he touched.

A Memorial Funeral Mass will be held at a later date, at St. John the Baptist Catholic Church at 10010 Carolina Trace Road, Harrison, OH.

At a future date, Jim will be interred at Riverside Cemetery in Troy, OH alongside his loving wife, Donna.

To order memorial trees or send flowers to the family in memory of James P. Haren, please visit our flower store.