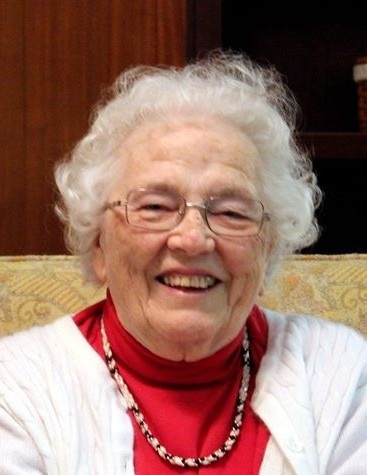 A celebration of life will be held at a later date.

If desired memorial may be made to St. Peter & St. Paul United Church of Christ (3001 Queen City Ave. Cincinnati, OH 45238) or The Christmas Fund for Veterans of the Cross/Emergency Fund (https://www.pbucc.org/index.php/christmas-fund-home).

Esther was born in Mayview, MO to Rev. Martin and Hilda Seybold, the oldest of two children – Dorothy is her younger sister. Her father was a German Evangelical Minister who served a series of smaller churches in the Plains and Midwest. After high school, Esther attended Gustavus Adolphus College in Minnesota and graduated from Dana College and was an English teacher for two years. She wanted to become a Director of Christian Education, since at that time; women were not seen as Pastor material. She attended Eden Seminary to pursue that ambition, attended one year  – met John Westermeyer and became his wife in 1948, the same year he graduated from seminary.

She became the typical Pastor’s wife of that era. She supported John in his ministry and assisted him in the churches he served. The first church they served was in Olney, IL where Marty was born; then a church in Johnsville, OH (now known as New Lebanon), where Carol was born in Dayton; then a church in Mulberry, IN where Joel was born in Lafayette, IN. In 1961, John returned to Cincinnati to serve the Price Hill UCC and reunite with his family.

As a Pastor’s wife Esther was the typical expectation for congregations. She was part of the Women’s Guild, possibly sang in the choir, taught Sunday School and Vacation Bible School, assisted with coordinating events at the church, did some office work (typing, making stencils, running the mimeograph, etc) when needed. Because of her love of music, of course she played the piano or organ for any event: from sing-a-longs to Worship Services. She assisted in accompanying musicians – both instrumental and vocal – for recitals and/or performance. She had the ability to sight-read music and after playing through one or two times, was good to go. She also directed the Children/Youth Choirs in some of the churches she and John were part of.

When John’s health declined, Esther needed to seek employment. She found employment at General Hospital, which has become University Hospital. She held various positions in Human Resources and worked her way through a variety of positions. She was the editor of the newsletter; she did Employee Orientation, she over saw the Craft Show, as well as many other duties.

As a Mother, she was the stay-at-home Mom of the era. She was active in our schools through PTA and room-mother duties. She was a leader in the organizations the three of us children participated in: Brownies/Girl Scouts, Cub/Boy Scouts, etc. She was our greatest supporter, but also our greatest critic – you could always do better. That was true whether in academics, Scouts, singing, or even playing games. We three children all are at times sticklers for “what is right or correct” and got that trait honestly. As a family, we grew up with two other families: the Howe’s and the Fitch’s. The three families did many things together at church functions, but also gathered for social events as well. We did family camping together, we met at each other’s houses for “game night”, we celebrated Birthdays, etc. Esther, Edna and Norma made those relationships work – and we still are connected today.

Even after retirement from working, Esther continued to be active at Price Hill UCC. She was organist and choir director for many years – until they closed their doors. She was active in denominational organizations which spanned a variety of topics. She traveled and was always wanting to learn something. I believe that inquisitive nature is what kept her so sharp mentally over the years; as well as her innate caring for others. She always treated others with care and concern, but would let you know where she stood.

As Carol said as we were talking the night she died, “She was force that could be reckoned with.” Many were touched by her life and her caring – she will be missed.

To order memorial trees or send flowers to the family in memory of Esther Louise Westermeyer, please visit our flower store.