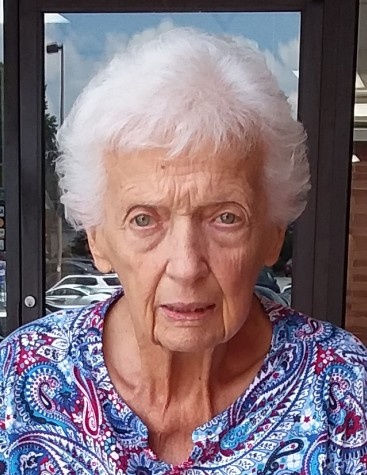 She was the youngest daughter born to the late Johanna (nee Hiller) and Patrick Balastra and was the sister of Dorothy Nurre. Dear wife of Alexander F. Meng (deceased) and loving Mom to their three children, Johanna, Alex (Beverley) and Caroline. Esther was a special Sister-in-Law to Shirley Meng, which created a Meng family of six. Grandmother “Gram”, to Alex’s daughters, Ashley Jones of Phoenix, AZ, Katelyn Meng & Alexis Meng of Louisville, KY and Caroline’s son, Kyle Meng of Cincinnati, OH. Also “Gram” to her Great Granddaughters’ Rachael and Baeleigh Boldra of Phoenix, AZ. and to Angelica Jones, also of Phoenix, AZ. Esther, a life-long Cincinnatian, grew up in Mohawk.

After being widowed, she went to Cincinnati Technical College, earned an Associate’s degree in Business and went to work as an administrative assistant for Hubert Company in Cincinnati/Harrison, Ohio. Esther enjoyed music (especially musicals), old movies (that weren’t old when she saw them for the first time), antiques, poker games with high stakes of wagers of fifty cents or less and she played many a Bingo game on Friday night at St Monica’s. She was a loving caregiver to Aunt Nora, her parents, husband Alex and sister-in-law Shirley. Esther traveled with her daughters, Johanna and Caroline, while in their care.

On Wednesday morning at 10:00 am a Funeral Mass will be held at St Monica’s-St George Parish.

Because our Mom also cared for all God’s creatures great and small, in lieu of flowers, the family requests that you donate to the Animal Charity of your choice.

To order memorial trees or send flowers to the family in memory of Esther T. Meng, please visit our flower store.