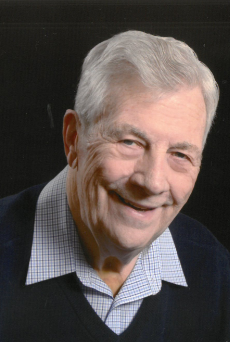 A long, long time ago, in the land of Detroit, Michigan, Thomas Maybee Hall was born to Dr. G.W. Clarence Hall and Loretta Mae Hall (nee. Baldwin) on the 24th day of March in 1936. He was born in to a family with an older sister, Jean, an older brother, Rene and would soon be joined by a younger sister named, Jane.

Growing up, little Tommy knew no stranger and would carry out daily visitation on his tricycle. His patient mother was well-known by the principal and faculty of his elementary school as she attended as often as he did. Tommy never started a fight but always finished them. He could not care less about school and would prefer to focus on sports instead. A great example of his lack of commitment to his studies is Tom’s response to his father’s question on the following report card notation: “Tommy is not dependable”. Little Tommy quickly replied to his father, “It means she doesn’t depend on me and I don’t depend on her”. But, it wasn’t too long in Tommy’s life that he saw the error of his sinful ways and at the age of nine, he gave not only his heart but his life in service to the Lord.

Upon graduating early from Royal Oak High School, young Tom Hall took a bus and a few dollars in his pocket to pursue studies at Bob Jones University – it was there God showed him what He wanted Tom to do with his life: to be a pastor who cares for people.

Shortly after Tom completed his studies at Bob Jones University he took his first post as a pastor with the United Brethren Church in Birmingham, Michigan. During his early years as pastor at various churches throughout Michigan, Tom completed his graduate studies where he earned a Masters in Divinity from Midwestern Baptist College in Pontiac, Michigan, Doctorate in Theology.

While Tom will be missed here on earth, his words of wit and wisdom will live forever in our hearts: You know what you do when you assume, don’t you?

Well, we’ll let you figure it out.

To order memorial trees or send flowers to the family in memory of Dr. Thomas M Hall, please visit our flower store.