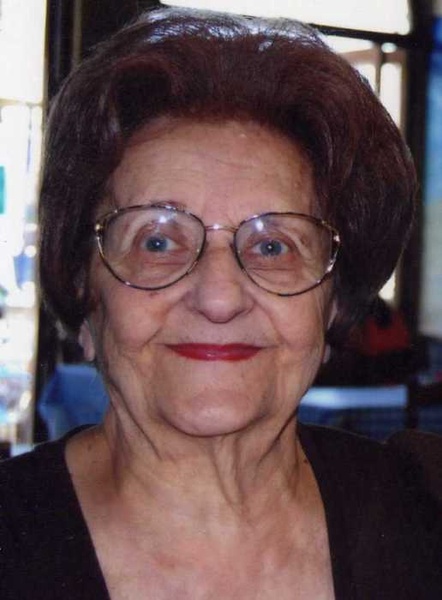 Angeline “Angie” Sampson (Christofield), 88 of Cincinnati, OH, passed away peacefully in her home surrounded by family on February 3rd, 2016.

Born in Cincinnati, raised in Bellevue, KY, Angie grew up in a large, Greek family. She became a dance instructor at Arthur Murray’s Dance Studio, married George Sampson in May of 1951 and together they raised their four boys, John, Tony, Michael and Nick.

As her family grew up, she was very active in the community at the Holy Trinity St. Nicholas Greek Orthodox Church and as her sons married and blessed her with grandchildren, she began her 28 years of service as the church’s secretary. Angie loved cooking and baking amazing dishes including lamb, pastitsio, Bellevue Chili and her famous Greek pastries; her family even convinced her to start and sell “Angeline’s Cookies” to local bakeries for the last few years. She had an amazing sense of humor and her exclamations of “oh, piffle!” will echo with all who knew her.

Angie had an enormous heart and a light that radiated out of her and touched every person she met. She was a beacon in her family and community and her light will forever shine.

Family and friends are invited to a visitation on Friday, February 5, 2016 from 4-8 PM at the Dalbert, Woodruff & Isenogle Funeral Home and again Saturday, February 6, 2016 from 12:30 PM lasting until the time of service at 1PM at Holy Trinity-Saint Nicholas Greek Orthodox Church, 7000 Winton Rd., 45224.

The family requests that any donations be sent to the Holy Trinity St. Nicholas Greek Orthodox Church.